" where did you go to school?"
An interesting question, perhaps, but irrelevant to a job interview.
The campus you spent five years on twelve years ago makes very little contribution to the job you're going to do. Here's what matters: The way you approach your work.
What have you built? What have you led? How do you make decisions? What's your reserve of emotional labor like? How do you act when no one is looking?
You are not your resume. You are the trail you've left behind, the people you've influenced, the work you've done.
- December 15, 2018 1 comment:


Merely beginning.
With inadequate preparation, because you will never be fully prepared.
With imperfect odds of success, because the odds are never perfect.
Begin. With the humility of someone who’s not sure, and the excitement of someone who knows that it’s possible.
- October 16, 2018 No comments:

Culture is changed by design, and design by culture.

There are things that look ‘right’, and others that don’t. We notice the mistyped word, the straight quote, the lousy kerning.

But then, the paradigm shifts. An illuminated manuscript and a dime-store novel are both books, but neither would look right to someone accustomed to the other.

The challenge of breakthrough design is in doing it with intent. To deliver more, not less of the change you seek to make, the leverage you seek to provide. To do the work with knowledge and care, not laziness or haste.

There’s an internal consistency to breakthrough design. It’s of itself, it reflects the intent of the designer. Copying the status quo is easy, commodity work. Creating a new paradigm, one that resonates, is the real work the designer seeks to offer.
- September 21, 2018 No comments:

_Bathrooms_
The class of a place is directly linked to the class of the bathroom. You’ll never find a 5 star hotel with pathetic bathrooms.
So, the next time, you are at a nice looking store/house/office with pathetic bathrooms, the “nice looks” are likely to be just a front. It’s just like the fact that your behavior matters most when the going gets tough.
That’s why McDonald’s systems ensure that bathrooms are cleaned every 15 minutes. Bathrooms matter. A lot.
So, how much attention do you pay to the bathrooms where you live and work?
- August 02, 2018 No comments:


Designing a building requires precisely 1.56 billion decisions and I will be the first to admit that I can’t make them all – I don’t need to make them all. I would prefer to collaborate with talented individuals who like to plug themselves into the process and use their unique and specific skill set so that together we can do something amazing. My ego is not so large or fragile that I am unwilling to recognize that there are talented people out there with something to offer and I make it a point to try and listen to those people as much as possible.

Which brings me back my topic of the day –

In the course of my job, I find myself in many conversations (especially in office) where I am trying to explain how something needs to get done. In most cases this is an easy process.Sometimes, the person I am talking to wants me to tell them every single thing that they need to do.

If I have to tell you everything …

Occasionally I will work with someone who thinks it is their job to simply show up and do what they’re told. For the record, I really don’t care for that sort of behavior … it smacks of apathy. That lack of interest, enthusiasm, and concern, especially when working in a creative field, is one of the things that makes me want to go home at the end of the day and lie facedown on the bed. While all of this might make me sound like a crank, I think it’s just the opposite. I have a huge threshold of tolerance for people who try their best but ultimately fall short of the mark. In those instances, I think it’s my responsibility to recognize the pattern and adjust my expectations accordingly. But this isn’t about someone’s ability, it’s about their desire, passion, and ownership in the creative process. What I particularly care about here is the effort . I want to surround myself and work with people who care enough to do their very best.

I don’t expect perfection but I do expect effort, anything less and you’re just wasting everyone’s time.

This is one of the posts that probably shouldn’t be written – but that’s what I do. If I were half as smart as I pretend to be, I would have probably taken this moment and walked around or read news. Instead of doing those things, I went through the cathartic process of writing a post on the matter and we’ll see if I hit the publish button by the time I’m finished.
- June 29, 2018 No comments:

This beautiful poem has been my guideline when I create spaces. Sometime I fail and sometime I succeed.
- May 31, 2018 No comments:


I’ve been wondering recently why as a country (or maybe globally?) , we’re all so desperately conservative when it comes to our domestic buildings. I don’t mean in terms of tradition, taste or style – but in the way that the building works.

There’s a typology that has evolved over the last few hundred years that is pretty much the default choice for everybody. This is a house that has basically the same accommodation in it – just configured differently. There’s usually a formal entrance, a living room, kitchen (which, if you’re feeling radical, may be in the same space), a series of bedrooms for individual occupancy, and a bathroom or two.

Bigger houses are generally more of the same, and while there may be many conversations about finishes and fittings, there’s almost no conversation about the 'principle of a dwelling', and little rethinking of the set of conventional spaces that appear to be beyond question.

Much as I’m interested in the technology of vehicles, domestic architecture is unquestionably throttled by the dominance and abhorrence of the awful patch of tarmac, which constitutes a driveway and a garage outside the front door.


Is there a different model of living from the default and unthinking identikit series of spaces in different dressings which most of us have?


Most of the design conversations around houses in this country are limited to issues of shape, colour and taste, and consequently they’re pretty boring. The conversation needs to move on now, and houses need to change, adapt and evolve. They need to challenge basic assumptions of how we live, and suggest alternatives.

At present, alternative models of domestic space are really only considered by a few progressive architects, and this needs to change and enter the mainstream. More than anything, domestic architecture should be progressive and idealistic, and not default to received norms. The tragedy is that the model of living that is rammed down our neck by mainstream house builders is a cynical one that they know will sell, as there’s little alternative. As a community interested in built spaces , we all have an obligation and responsibility to challenge this.
- April 15, 2018 No comments:


space
1. a continuous area or expanse which is free, available, or unoccupied
2. the dimensions of height, depth, and width within which all things exist and move.

memory
1. the faculty by which the mind stores and remembers information.
2. something remembered from the past

identity
1. the fact of being who or what a person or thing is.
2. a close similarity or affinity
Can the study of a single street capture the place-making and identity formation of the population of an entire city?

A space surrounded by anonymous houses and populated by people are sites of memories and identities. The empty spaces, the no-man's land, are the true spaces of memory - a vanishing memory. Memory creates the site. There are different ways of keeping memory, of building memory, of losing memory. To build up a (new) identity, you not only have to remember, but also to forget.


Urban experiences are diverse and dynamic, changing often with advances in technology, shifts in capital investment, and migrations of people. They are shaped by power and wealth, as well as ingenuity and labor. Urbanity is layered with cultural and social histories, and the demands of day-to-day living. Getting from place to place puts a city dweller in contact with a stimulating variety of people and material conditions. At the same time, these experiences can be exhausting and tend to render the urbanite anonymous within the crowd.


Like the boundary between public and private spaces, urban experience is not fixed. The intensity of urban encounter may magnify our sense of these spaces, or cause us to miss them altogether. Cities are malleable, pliable, and constantly changing, and as such the experience we have of urban spaces is always a negotiation between various powers and influences.

I saw this sign on a recent site visit - signage for safety on a construction site. 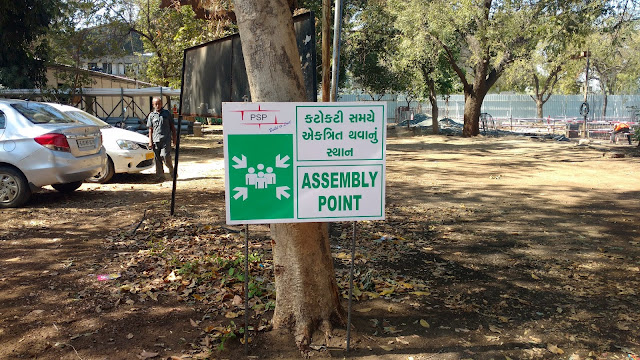 And instantly reminded me of another one which I had taken years ago.  The image is blurred but the caption is so witty! 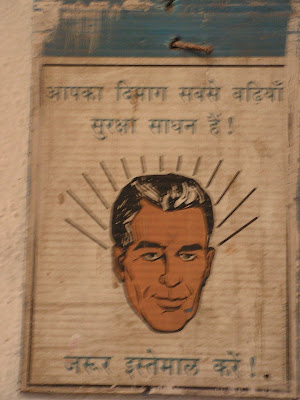 Your brain is the best safety instrument! Absolutely use it!


'Simplicity is the other side of complexity' - Glenn Murcutt, 2017

Simplicity is effortless composition, an orderliness with lyrical qualities — like in a great painting that has only enough brushstrokes to convey the idea, in which the painter uses just the right amount of color, making it impossible to imagine another stroke or another color without its ruining the composition. Great design, whether in paintings or architecture, shares this quality.

Often architecture is formed by intersecting geometries, but seldom are the geometries orchestrated in such a lyrical way as the two gently sloping roofs of this Centre. 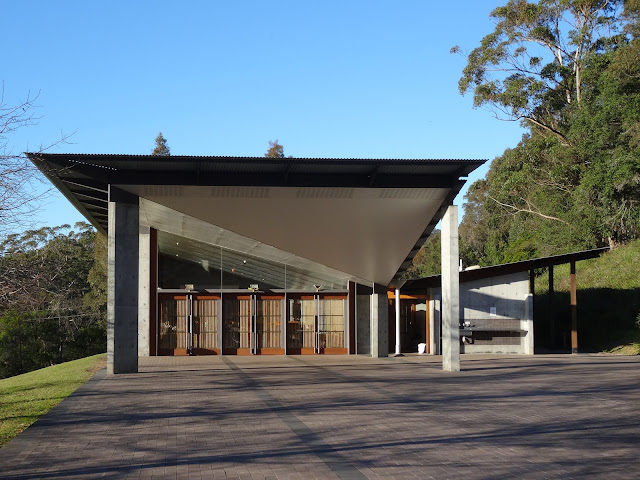 
Beautiful architecture is not confined to the indoors, but should extend to outdoor living spaces, too, completing the idea and creating a holistic design. 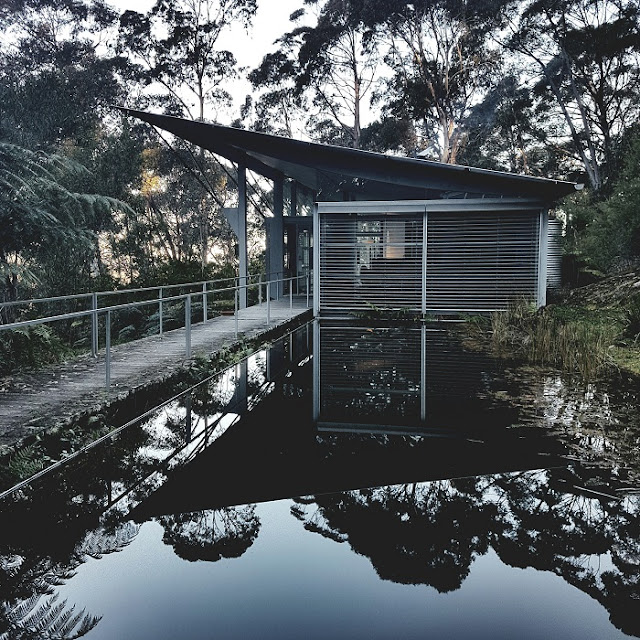 
The beauty of this outdoor space lies in its simplicity: a simple, clean edge and geometry along with a rhythm of concrete bowls and bold-color furniture. 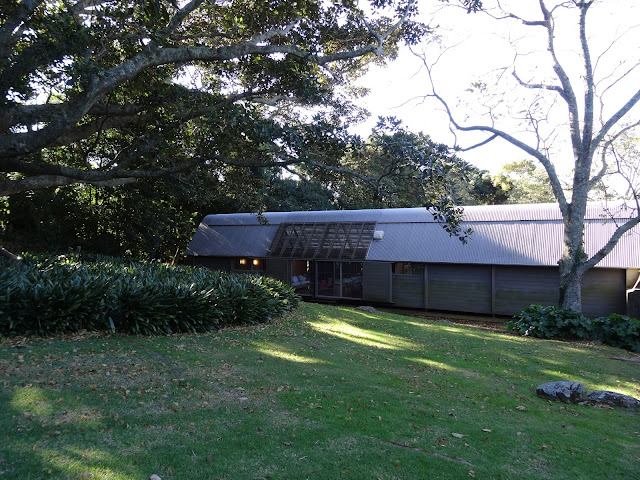 Simplicity, tranquility and calm were the design qualities which came to my mind when I visited buildings designed by Glenn Murcutt.

And with these qualities I did like to plunge into the new year!

_ mind the gap_  There's a gap between where we are and where we want to be. Many gaps, in fact, but imagine just one of them. ...

a believer
Hi, I am Payal Patel. Trained and practicing as an architect, my school of thought is reliant on schooling my thought - thoroughly, regularly. The combination of my love for photography (https://www.phpweblogue.com/) with an insatiably curiosity about human nature makes a blog a rewarding hobby for me. Feel free to ask any questions you may have .. about me obviously!